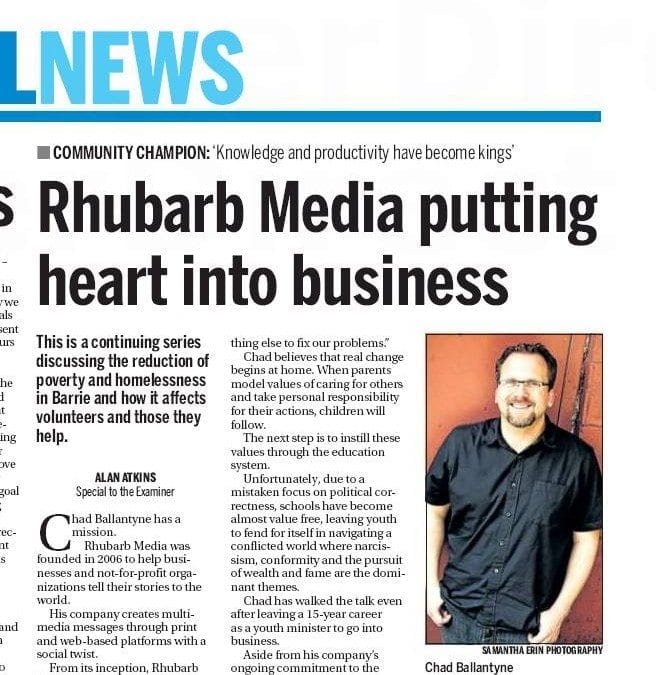 Chad Ballantyne has a mission.

Rhubarb Media was founded in 2006 to help businesses and not-for-profit organizations tell their stories to the world.

His company creates multimedia messages through print and web-based platforms with a social twist.

From its inception, Rhubarb Media has developed a reputation for supporting community organizations, such as the David Busby Street Centre, by donating web and promotion services and encouraging them to market themselves like businesses.

He feels not-for-profits are unsustainable if they rely solely on donations and government funding.

It also means that the funding determines the programs rather than the reverse.

On the other hand, Chad feels strongly that there has been a philosophical shift in our thinking from the social to the corporate model.

“Knowledge and productivity have become kings,” he says. “But we have lost our heart if everything is measured by the bottom line.”

Chad believes that although some poverty will always be a fact of life, much of it in affluent nations like Canada is due to poor distribution of abundant resources.

“We have to ask ourselves if we are prepared to give up some of our personal comfort and privileges if we want to reduce poverty and homelessness,” he says.

Organizations like the David Busby Street Centre deal effectively with crises that result from our current value system, according to Chad. But we need to go deeper by instilling new values and priorities in the young to change the problem at the source.

“There is a lack of strong mentoring and leadership in society today,” he says. “We used to look to the church to take the lead in dealing with social problems. Although I think churches can play a bigger role than they do today, that isn’t the answer. We have gradually lost the concept of personal responsibility. This is why we don’t blame ourselves but look to big government or big business or something else to fix our problems.”

Chad believes that real change begins at home. When parents model values of caring for others and take personal responsibility for their actions, children will follow.

The next step is to instill these values through the education system.

Unfortunately, due to a mistaken focus on political correctness, schools have become almost value free, leaving youth to fend for itself in navigating a conflicted world where narcissism, conformity and the pursuit of wealth and fame are the dominant themes.

Chad has walked the talk even after leaving a 15-year career as a youth minister to go into business. Aside from his company’s ongoing commitment to the community, he voluntarily created and ran a 14-week youth program called Spark for 3 grade 8 classes from Holly Meadows Elementary School.

“It was an interactive course that discussed life skills and values,” explains Chad. “Ultimately, we tried to fill in the gaps by teaching them how to fight the three main battles in life: 1. Doing it alone versus teamwork; 2. Conforming versus being creative; 3. Being famous versus pursuing greatness.”

Chad grew up with parents and grandparents who were ministers and watched them give constantly regardless of their own often marginal circumstances. He was taught that each of us has an obligation to use our gifts to help others accomplish their goals in life. This is his corporate philosophy as well. Although many people are afraid that this approach will hamper personal success, Chad disagrees.

“Our company has been around since 2006 and despite giving away significant time and money, we continue to expand. Success is important,” he says. “If we fail, we can’t be in a position to help others or provide employment.”

While they do a lot of work for the arts and cultural community and other non-profits, they have also done work for the City of Barrie, and large publicly traded corporations.

“I have been called a social capitalist,” Chad says with a chuckle.

He sits on the community committee for Barrie Pathways. This new organization seeks to end homelessness by creating a continuum of care beyond the triage services provided by organizations like the David Busby Street Centre.

“The Busby Centre does excellent work in giving people a hand up. But we need follow up to keep people from falling back into the cycle of poverty and homelessness,” he says. “Barrie Pathways hopes to do this through the co-operation of many agencies and the community at large. By providing better integration of services we can eliminate the gaps that so many participants fall into between service providers.

“We believe we can reduce poverty by ending homelessness.”

He admits people can be overwhelmed by the magnitude and complexity of social problems.

I asked him what he thought individuals can do to make a difference.

“Each of us can do something. My own goal is to mentor other business owners through example to show that business can become the conscience of the community,” he says. “Specifically, I think individuals can do a number of things. It starts with changing our own thinking about helping others.

“We can do this by getting personally involved in doing something for our community as well as giving more. We have to think about the legacy we wish to leave behind. We have to be counter-cultural. And we have to start at home by empowering our children to believe that we can never be great by ourselves, but that greatness is measured by the quality of life we make possible for everyone else.”

Alan Atkins is a writer and volunteer on the Community Relations Advisory Council of the David Busby Street Centre. For more information or to get connected to the Busby Centre, email getconnected@busbycentre.ca or call 705-739-6916 or visit www.busbycentre.ca. If you know of a Community Champion contact Alan directly ataatkins@rogers.com or 705-791-1141.